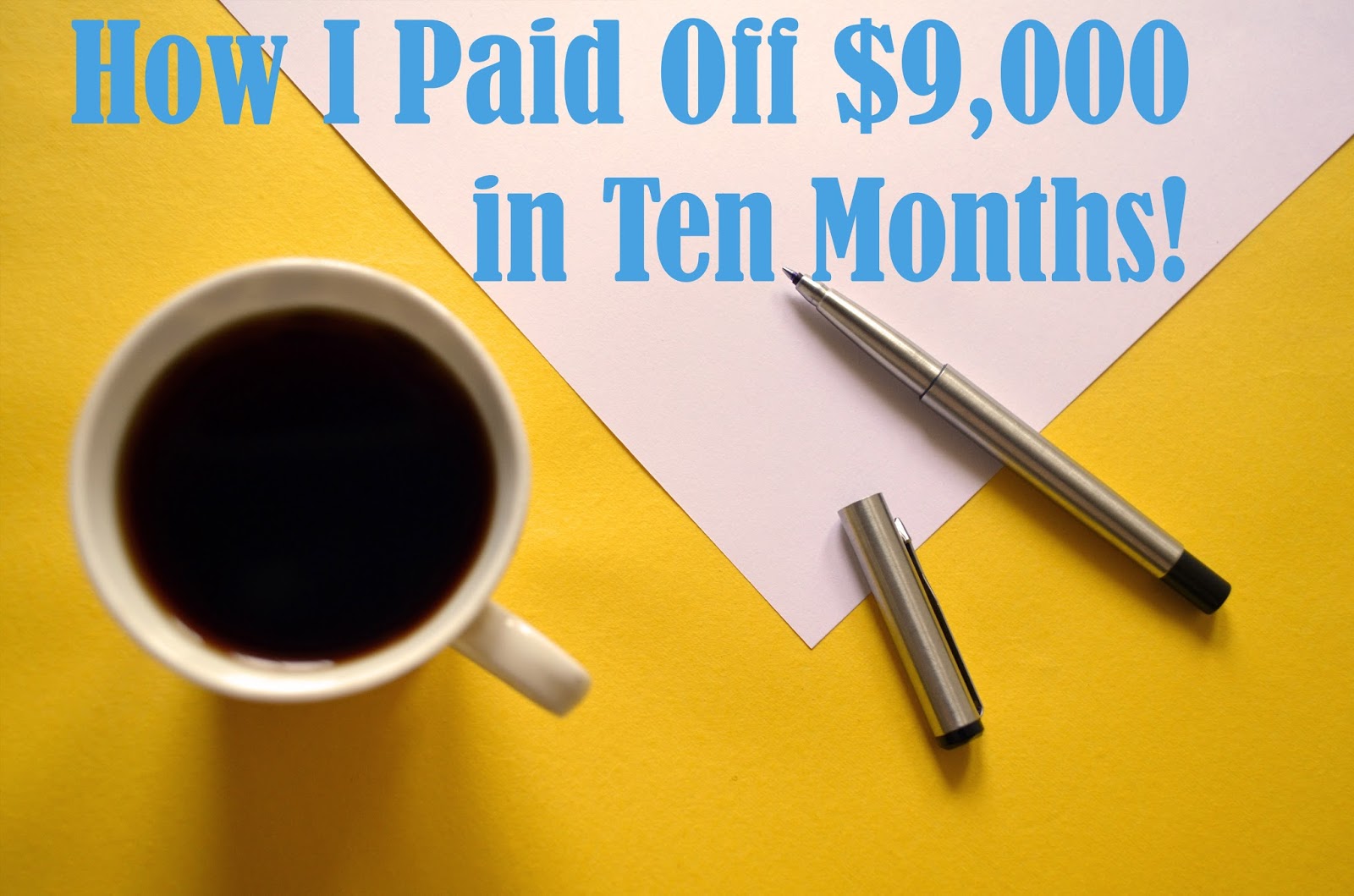 I won’t go into too much detail on how I got into this debt hole. You can read about that in the “My Debt Story” post. This post is meant to explain how I climbed out of that $9000 hole and took my life back. It’s a lengthy post but it will be worth the read. This is my personal journey through the climb so I am not suggesting that everything I’ve done should work for anyone. Everyone’s story is going to be a little different but you will be able to take many of these things and apply them to your debt-tackling strategy.

My Why
Suddenly I found myself with a few objectives; some things that drove my desire to get serious and get rid of this debt.  I wanted to buy a house in the near future but I had no savings and my credit score was not great. I wanted to be secure and have an emergency fund so that I could handle life’s setbacks. I also became concerned with how my debt could affect a potential partner in the future. That kind of baggage would be a red flag for anyone and I wanted to be my best self for my future partner.  I also learned the value of owning money instead of money owning me through reading and learning about money management. I wanted to be in control. Suze Orman has been one of my most inspiring influences in this attitude toward money. 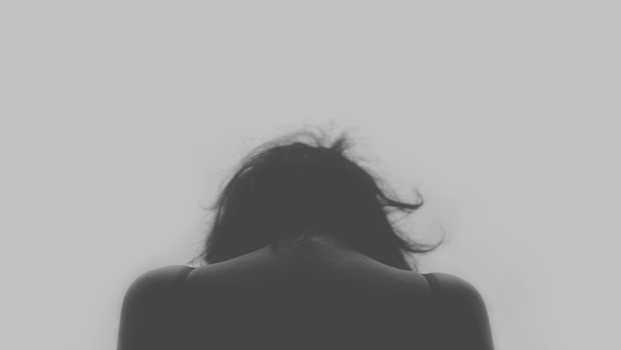 Mental Health
I had to get to the root of my spending problem. I did not seek therapy specifically for my spending issues. I’ve been seeing a therapist for about four years and as my depression and problems had cycled, the pattern of irrational spending surfaced. Spending was my coping mechanism. Through sessions with my individual therapist as well as participating in Dialectical Behavioral Therapy, I was able to find and learn other productive ways to cope with my problems. I had “tools” that I could use instead of swiping my cards. Again, I didn’t go into therapy just to get help with my debt. It was something I was already doing and was available to me.

Budgeting
Over drafting my bank account was a huge issue. I couldn’t appropriately allocate my paychecks to my monthly expenses. I was overspending on some things (including credit card payments) leaving me with not enough money for other things. A budget is what I needed to help me control my spending and to help me be aware of where my money was going. It took some time to find a budgeting system that worked for me. But when I finally did, staying on track was so easy! I felt like I’d gotten a small little slice of that freedom that I was working towards because I felt more in control. A wonderful colleague I worked with at a previous job was the one who set it up for me. I have created a free download of this spreadsheet that I named “The Matt Budget” after the man who was the most help in my debt journey. His model is the basis for this budget spreadsheet system. You can find the spreadsheet and an explanation of my money management practices in my previous post.

Go Without/Cut Down
Once I had established a budget, it was easier for me to find areas that I needed to cut down on spending. This meant sacrificing some things that I loved. It was hard and took a great amount of discipline but every bit of it paid off. There were months that were harder than others and my social life definitely did suffer as a result. But there are other ways to connect with your friends without having to spend lots of money. Here are a few things I did to trim down my spending:
Surveys
I started taking surveys to earn money or Amazon credit, which I used to buy household items. It wasn’t a ton of money but every little bit helped me save money on household items or pay down my debt. The three websites I used the most were Opinion Outpost, Focus Forward, and UserTesting. I got invited to participate in a few studies and focus groups, which earned me extra rewards.

Move Home
I was fortunate enough to have parents who were willing to take me back in without charging me rent. Roommates weren’t an option I would consider for myself. I know I could have saved so much money and not have had to move back home with my parents but my privacy and peace of mind will always be priority for me. That’s just my personal preference. The point of this change was to live as cheaply as possible. For me, living at home rent-free won over paying rent and sharing a small living space with a roommate.

Consolidate
I wish I had done this sooner! I applied for a credit card at my credit union so that I could transfer my entire debt balance to them. My credit union, Wings Financial, was fantastic and took on all my debt with an 8.9% interest rate. That was less than half the interest rate on my lowest rate card! I was able to make a single payment instead of multiple payments, saved so much money in interest, and could pay down my debt quicker. I was worried the credit inquiry would hurt my already low credit score but instead, my score went up quite a bit. This is because my overall line of credit (across all accounts) increased when Wings approved the balance transfer and therefore my credit utilization decreased. I cut up all my credit cards except for one with a $2500 limit on it. That one was to be used in the event of an emergency since I did not have an emergency fund. Once I paid everything off, I cut this card up, too.

Student Loan Forbearance
Coming from a background in financial aid, I would NEVER recommend this to anyone. The only reason I made the decision to do it is because I am a state employee and can take advantage of the Public Service Loan Forgiveness Plan, assuming I stay with the state for 10 years. I also had only made about two payments under the PSLF before applying for forbearance. Had I been a few years into making payments, I would not have done the forbearance. This is because I would have to restart my 120 payments after the forbearance ended. Also, I only requested the forbearance for one year even though they would have granted up to three years. You have the option of paying the interest during this time period but I opted not to since my forbearance period was going to be so short.

Tax Returns
When I filed my taxes and got my return in 2015, I applied the entire balance to my credit card debt. I did contemplate stashing half of it in an emergency fund but I was too eager to get rid of this debt. 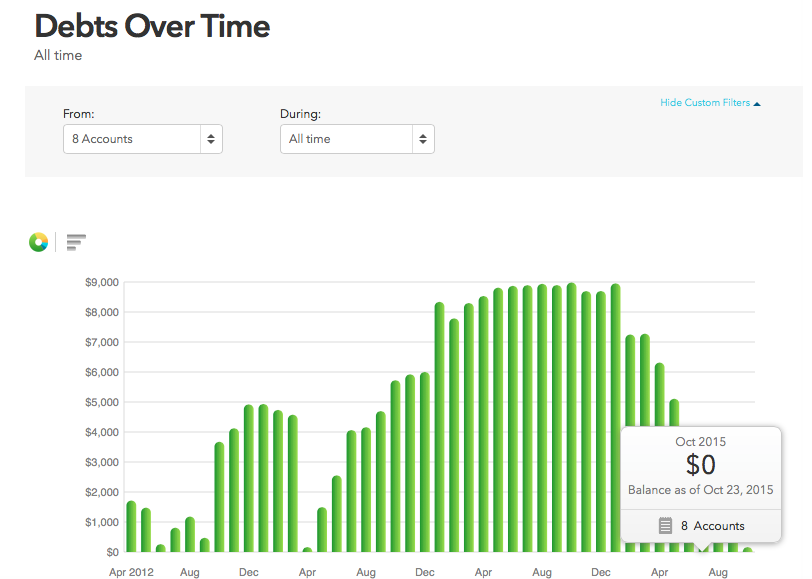 Monitoring Tools
In addition to my spreadsheet, two helpful tools I used during these ten months (and still use today) helped me monitor my credit score and overall financial situation. Credit Karma is a free service that allows you to monitor your credit score and report. It was so motivating to see that number climb as I tackled this debt and I was so surprised that it increased so quickly. I’ve always heard that it can take years to repair damage done to your credit but going from a 611 to a 750 in less than a year seemed pretty quick to me! (I don’t have any delinquent accounts or bankruptcies on my record nor have I ever made a late payment.) I used Mint to monitor all my accounts in one place. Mint is also a free service and now has credit score monitoring but it isn’t updated as frequently so that’s why I still used Credit Karma. Anyway, the graphs in Mint are GREAT visuals. I really enjoy using the net worth bar graph. That was my favorite while paying down my debt because I could actually see my debt declining and my net worth increasing at the same time. The net income bar graph kept me focused because in the past, I’d spend more than I earned. I wanted to see that string of months in green continue, so it helped me be conservative in spending.

In doing all these things, I was able to put about $1000 a month toward my debt. I made my last chunk payment in mid-October. Every struggle to cut down spending and pay this debt off has been 100% worth it. Every outing I had to miss out on, every invitation I had to turn down, all the judgment (“You’re no fun.” or “How come you aren’t drinking?”), and all the other struggles were beyond worth the feeling of freedom after making my final payment. I stopped caring about what other people thought of me (their opinions don’t pay my bills), I learned discipline, I gained more independence, and I gained more control over my life.

I have cut up all my credit cards (including the previously mentioned card) except for my Wings card since it has the lowest interest rate and I will need something for any major setbacks until I get my emergency fund established.

I still have my car loan and student loans that I am paying on, but the payments and interest rates are manageable. Now that my credit card debt is gone, I am so much more in control of how I handle these debts, which many consider to be “good” debt. To me, no debt is good debt but I have a solid plan for paying these off and preparing for the future so that I don’t bury myself in “bad debt” again.