Spaghetti without the Noodles!

The first time I ever heard about spaghetti squash was while I was watching a Dr. Oz Show episode a little over a year ago. On stage, he took a fork and ran it across the "flesh" of a spaghetti squash that had been cut in half and was probably also cooked. The "flesh" shredded into thin, noodle-like strands. He talked about how it is a great substitute for pasta, which is full of starch and carbs. It wasn't until a few months ago that I finally gave in and decided I needed to see if it was really worth the swap. I decided to try something very basic: Spaghetti and meat sauce! I also made sure to have regular spaghetti noodles on hand in case it did not turn out. Spaghetti sauce is something that I am very comfortable with so I apologize for not having the measurements available for you as I just chop, pour, and add to my liking. This was my result: 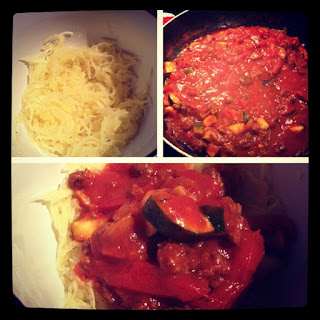 Spaghetti squash:
I looked at about six different webpages to compare the different methods for cooking the squash. I decided to go with the microwave route. Next time, I will definitely try using the oven or boiling it. I pierced my squash with a fork, put it on a plate with a paper towel over it, and let it nuke for about eight minutes. Some websites say longer or shorter. I went with something in the middle. I cut it in half after it was done cooking (using oven mitts because that sucker was HOT) and then used the fork first pull out the seeds (discard those) and then to pull the "flesh" apart into little "noodles."

In a large skillet, sautée the the garlic and onion in olive oil. Once the onion and garlic become fragrant and somewhat translucent, add the ground beef. I cooked the ground beef until it was brown all over and then drained any water/fat. Add the tomato sauce, bring it to a bubble, and then let it simmer for a few minutes. Add the rest of the ingredients and stir occasionally until tender. Add salt and pepper to taste.

I was not too happy with the texture of my spaghetti squash, which is why I decided I will have to try another method next time. They may have needed to be cooked longer but the oven would probably do a more thorough and even job. I still ate it and did not opt for my backup noodles because my sauce had so much flavor so it was not a complete failure!

Any tips for cooking spaghetti squash would be greatly appreciated!